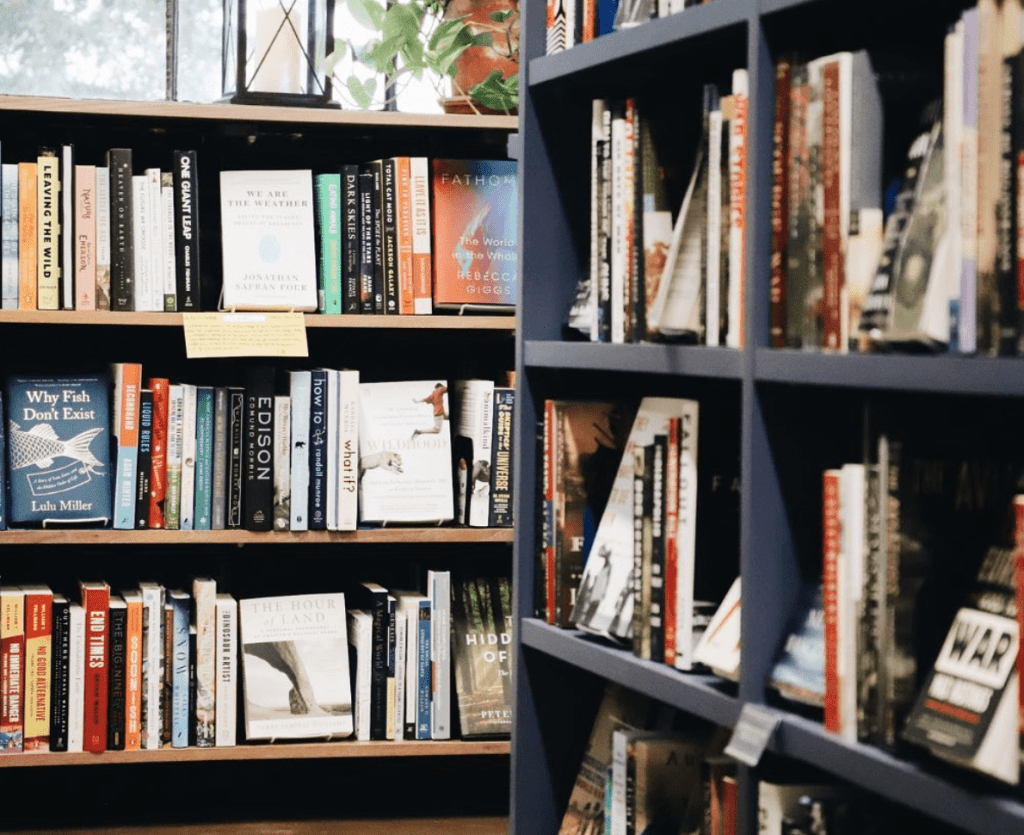 Welcome to our community book reviews post! This month features 4 novels that you can find at Bookmarks. Get to know our local reviewers, all of whom shared with us one of their favorite characters in a book and why!

Books were donated by Bookmarks; we will be posting new reviews monthly.

Reviewed by Maia Dickinson (Pictured above!)

Fine is the result of a decade-long project by comic illustrator Rhea Ewing. As a senior in college, Ewing was full of questions about gender—its expression, role in relationships, impact on healthcare, limitations in language expression, ability to act as a catalyst for community—and spent years interviewing dozens of subjects who were exploring the same ideas. The result is a thorough, tender, and deeply probing comic.

Ewing serves as the perfect narrator for this journey: they assume nothing, question everything, and rarely interject, creating space for incredibly raw and honest stories to be told without interference. The comic is often drawn directly from the interviewer’s seat, allowing the reader to listen and absorb each character’s story. Their choice to present the interviews as a comic adds a much fuller picture to many of the trials and situations described; the illustrations frequently capture the tension of not always appearing how you feel or identify. Topics are wide ranging from voter representation and race to insurance particulars. Uniquely, the interviews are centered on subjects in the midwest, containing experiences that might be decidedly different and lesser-known than those on either coast.

Complete with notes, a bibliography, and suggestions for further reading, this comic is an excellent resource and companion for anyone exploring the same questions, but equally as effective for those who may not be, taking great care to explain what may be unfamiliar topics along the way.

Some of my absolute favorite characters are Edith Wharton’s anti-heroines—Undine Spragg, Lily Bart, and Countess Olenska to name a few—not all always likable but very complex and nuanced female characters, especially for their time!

Reviewed by Victoria Britt (Pictured above!)

You know the adage ‘When you marry someone, you marry their entire family?’ In her novel Love Marriage, Monica Ali takes on all of the complicated, messy, disastrous ways to be a family. Our central character is Yasmin, a London-based doctor-in-training, born of South Asian, Muslim parents and preparing for her upcoming wedding to Joe, a fellow doctor who was raised by an eccentric, academic mother. Joe and Yasmin are decidedly different, and the novel makes a point to emphasize the disparity in their past relationship experiences – she has only had one other boyfriend, and he was a prolific Tinder user. There are many subplots that are revealed throughout the course of this epic novel (it is nearly 500 pages!), starting when a nurse drops the bomb on Yasmin that Joe may not be what he seems. Yasmin also navigates the crumbling of her family due to the frequent, violent clashes between her whiskey-drinking, science-focused father and her younger brother, the soft and sensitive Arif, who is struggling to find his place in the world. Secret after secret are revealed, which keeps a dedicated reader engaged; given the novel’s length, however, it does take a bit of effort to get to them.

Though I’ve read a countless amount of books in my life, one of the first full-length novels I finished was Anne of Green Gables, and I still think fondly on the character of Anne. She is whip-smart, tenacious and a wonderful friend — everything I aspire to be!

Reviewed by Michelle Colbert (Pictured above!)

The writing for this book is a stream-of-consciousness narration that is very engaging. Emilia ends up meeting another American on her trip, and this is when the story really takes off. Emilia is trying to decide if she can open up her heart to someone again. This book is both hopeful and sad as the reader is following Emilia through her heartbreak. This novel is an Eat, Pray, Love for millennials.

My favorite character in a book is Andie from The Unexpected Everything by Morgan Matson. Andie reminded me of myself when I was a teenager! A great summer YA contemporary!

We Measure the Earth with Our Bodies by Tsering Yangzom Lama

Reviewed by Marissa Joyce (Pictured above!)

Being a mom, I get asked dozens of times a day what different words mean. Some definitions are easy to give, while others require longer explanations than my kids care to listen to.  And then there are the words that seem easy to explain, but, once started, have layers of meaning that go deeper and deeper.

These are the themes that We Measure the Earth with Our Bodies explores. This novel is a multi-generational story of the refugees of Tibet and the parts of culture one is allowed to either keep or give away.

I enjoyed the in-depth look at the meaning that is found in artifacts from the past, who those museum items belong to, and how and when they should be shared. It’s a conversation I believe is ever-expanding and one that is increasingly relevant today.

I found other parts of the book a little dry and hard to get through, but on the whole I learned a lot and felt transported to other times and places.

I have always felt a soul connection with Luna Lovegood from the Harry Potter series! Like Luna, I often have my head in the clouds and march to the beat of my own drum.